Remedies from my garden: Phytolacca Phytolacca is an unbelievably amazing plant; in one season it will grow from a small weed to a 10 foot tall tree. To some, it is a poisonous nuisance, but for a homeopath, Phytolacca is a very useful remedy. In my garden it pops up everywhere but I only allow it to grow along the eastern fence, and it requires rigorous pruning all summer long. Also known as pokeweed, Phytolacca has a wide range, growing from Maine to Florida as well as in California. It is anything but “pokey”- it grows to a remarkable size and by the end of the summer, the trunks are 2 inches in diameter! I have to use a saw to cut them down. In the spring they start again as tiny shoots. You can almost sit and watch it grow to a magnificent height. I enjoy the fact that it is a famous homeopathic remedy, but also that songbirds love the berries and are therefore attracted to my garden. For at least hundreds of years it has had diverse uses and multiple preparations. All parts of the plant were used, though the seeds and roots were especially valued for their medicinal properties. Infusions made from the berry were used to treat dysentery. Berry wine was used for rheumatism. Crushed raw berries were rubbed on skin lumps and the sore breasts of nursing mothers. The berries sometimes were eaten as an analgesic. From the root, poultices and salves were used on skin ulcers, eczema, bunions, bruises, sprains, swollen joints, poison ivy rashes, and warts. Steam from a root decoction was used to ease hemorrhoids. The leaves of the plant were also used for skin problems and rheumatism. In addition, they were used as an emetic, a laxative, and a blood building tonic.

Phytolacca americana (homeopaths call it Phytolacca decandra), is native to the eastern United States. Phytolacca is an international construct combining phyton (Greek for plant) and Lac (Latin for a dark red pigment.)  The word “poke” comes from the Virginia Algonquian (Indian) word “pakon” or “pucone” first recorded in 1708. Pakon refers to a plant used for dye or staining, and indeed a red coloring from the poke weed’s berries has been used as a dye for centuries. Indians used the juice to color feathers, arrow shafts, garments, even their horses. Berry juice was also used at one time to color wine, but that practice has been discontinued. In a modern twist, red dye from poke berries doubles the efficiency of certain solar cells. 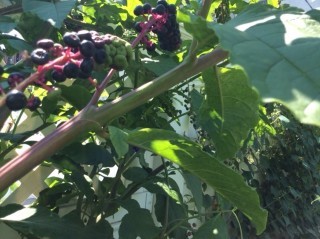 In 1752, Benjamin Franklin wrote about pokeweed to a Frenchman who was translating his works. Franklin described the pokeweed’s berries as “large as peas: the skin is black but it contains a crimson juice.” The juice, he wrote, “thickened by evaporation in the sun” was “a specific remedy for cancers” that “caused great pain but some persons were said to be cured. I am not quite certain of the facts; all I know is that Dr. Colden had a good opinion of the remedy.”

American homeopaths in the 19th century who wanted to make their mark in homeopathy set about doing provings of many substances (thank you!). Phytolacca was one of those. The original proving of Phytolacca appeared in the second volume of the Transactions of the American Institute of Homoeopathy. It is collated with other provings- making sixteen in all, which appears in Dr. Constantine Hering’s Materia Medica.

The big ideas of Phytolacca reside in three aspects of its operation: its action on the throat, its power over certain manifestations of syphilis and rheumatism, and its influence upon the mammary glands.

This is from Roger Morrison; “Kent described Phytolacca as a “vegetable Mercury” because of the many corresponding symptoms: the syphilitic relationship, the effects on bone, glands, and the throat. Phytolacca was an important remedy for diphtheria in the past. Most of the symptoms in the remedy are in the glands themselves – especially breast, parotids and tonsils.”

From this we see that the herbal uses for this plant fit the homeopathic uses, as it should be. Modern science is finally catching up and Phytolacca is now being researched as a cancer cure and as an HIV cure.  A protein isolated from the leaves called pokeweed antiviral protein (PAP) appears to be effective against such viruses as herpes and HIV and as an anti–tumor agent. Studies show PAP, in combination with other drugs may be useful in treating osteosarcomas, some soft tissue sarcomas, prostate, breast and ovarian cancers.

Pokeweed gets things moving in the body, especially the lymphatic system, the joints, and the metabolism. Used externally, it has been known to cure things such as scabies, ringworm, etc. We can certainly see why it is compared to Rhus tox. In fact, for some gardeners, skin contact causes a poison ivy like rash, so one should use caution when handling. And this weed is highly poisonous so do not eat it, even though you will read online about the delicious shoots that appear in the spring. Instructions are to boil the young leaves 2-3 times, removing the water each time in order to lessen the poison. That is enough information for me to say, DO NOT EAT PHYTOLACCA. In the 18th century when greens were scarce I might understand it, but not these days. Why risk illness, or even death. Yes, it kills. The root is the most poisonous, but all parts are of the plant are dangerous. Some folks still believe in eating 1-3 berries a day for arthritis, but I do not recommend this practice either. Go to a homeopath instead and get a good remedy for your arthritis. Maybe it will be Phytolacca!